Community-led marine conservation plays a significant role to protect coastal resources in FMA 715 and surroundings. Under the USAID Sustainable Ecosystems Advanced (USAID SEA) project’s intervention, community-led marine conservation has shown a positive impact through the active participation of the Sea Champions or Pejuang Laut. Some interesting stories about how the Pejuang Laut amplify conservation messages regarding their role as key actors in driving conservation actions in their respective areas were shared during the interesting virtual discussion about ”Protecting Marine Animals and Coastal Resources: Embracing the Spirit of the Sea Champions and Conservationists”. The discussion was organized by USAID SEA and Loka Pengelolaan Sumberdaya Pesisir dan Laut (PSPL) Sorong, Directorate General of Marine Spatial Planning (PRL), Ministry of Marine Affairs and Fisheries (MMAF) and broadcasted live on Youtube on Thursday, September 24, 2020. 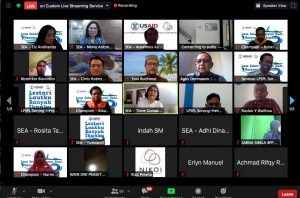 Roberth Hutuely shared his “before” and “after” stories related to the USAID SEA project intervention. Roberth was recruited as a Pejuang Laut by Coral Triangle Center (CTC) as the implementing partner of the USAID SEA Project. CTC provided comprehensive training and capacity building for the local community so they would understand the importance of marine conservation, including marine animal protection.

I was once a sea turtle hunter. I caught sea turtles for consumption and trading. I did not know the sea turtle is protected and I might be sentenced as a criminal for my actions. Once I learned about marine conservation delivered by CTC throughout several training sessions, then I understood I made a big mistake. So, I am determined to stop hunting and dedicate my life to protect the ocean and its resources. If I didn’t do it, then who else? If we didn’t start from now, then when? Don’t wait until the resource is gone and we will be crying for it.  – Roberth Hutuely, Pejuang Laut

Roberth also regularly conducts marine surveillance with the Community Stewardship Group (Pokmaswas) Hena Berkarya, where he is assigned as the leader.

Another Pejuang Laut, Nurmini Sifati, or Mama Nur, who is assisted by Wildlife Conservation Society (WCS) from Morotai Islands, North Maluku shared her story about her initiative to stop people from littering the sea and coastal area. She said that garbage is now becoming a big problem in her village. She then took an initiative to socialize proper waste disposal to school-aged children. Mama Nur said, “If the sea has given fish, we should not retaliate by giving the trash to the sea”.

Last but not least, Rika Ocelin Masso, from West Papua who was assigned as a Pejuang Laut by Conservation International (CI), shared her thought about how difficult it is to change people’s behavior to support marine conservation. As a fish seller, Nona Rika does her campaign to support sustainable fishing during her fish selling activity. She goes from housewives to fishers’ communities to deliver a message to not consume or take juveniles to preserve the fish stock. To close her sharing session, Nona Rika said, “People who take good care of nature are people who appreciate the creation of Almighty God”.

The stories shared by the three Pejuang Laut are inspiring and expected to be replicated by other Pejuang Laut and other community members to support marine conservation. If we don’t start to conserve, then who will?