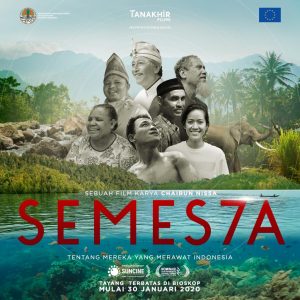 CTC, in collaboration with The Body Shop Indonesia, co-hosted a film screening of the Indonesian documentary film Semesta for students, non-government organizations and partners on March 1, 2020 in Denpasar. The film Semesta (Islands of Faith) shows how local leaders are leadning voices of environment protection through the perspectives of different religions and beliefs. It uses the voices of seven communities taking a stance and making a change in seven provinces across Indonesia.

Prior to the film screening, CTC Marine Conservation Advisor Marthen Welly spoke about the importance of each indvidual doing our own efforts to contribute to environmental protection.

The film begins in Bali, featuring Balinese concepts that nurture nature. It also featired Nyepi, wherein all activities must cease, including the use of electricity. The texts explain how this one-day rest not only realigns humans with nature, but also cuts daily emissions in the popular tourism island by a third, contributing to the mitigation of climate change. The journey continues on to Sungai Utik in West Kalimantan where a Dayak Village is protecting its forest. 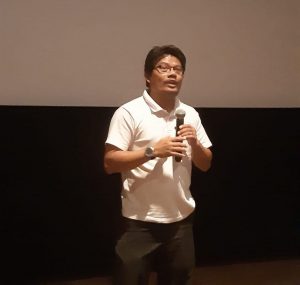 We then go to Manggarai in East Nusa Tenggara, where, a Catholic priest leads a community to build a micro-hydro power plant. Their success shows how areas without access to electricity in Indonesia could utilise environmentally-friendly renewable energy to help with reducing emissions and mitigating climate change. Next is Papua, where a local woman’s group assist the rebalancing of nature through sasi, an Eastern Indonesian tradition of regulating fishing seasons. Sasi shows how traditions provide a chance for marine biota to reproduce, sustaining their numbers and ensuring that the bounty exists in the future.

In Aceh, a local Imam is teaching villagers how to live in harmony with with wild elephants living in nearby forests that often wander in the villages and destroy crops. The film explains how protecting elephants means protecting the forests and the role of ecosystems in managing climate change. The film journeys to Yogyakarta, where a family is committed to practice thayyib, where everything consumed must originate from virtue and good values. The family practice permaculture to reconnect with nature and open workshops classes to spread this practice and understanding. 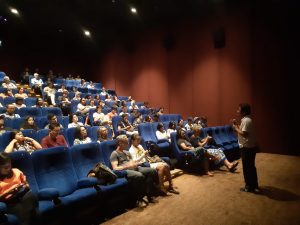 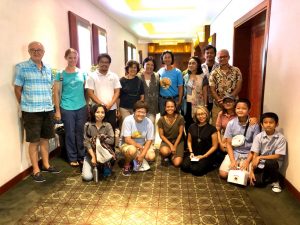 The film ends in Jakarta, where a young couple runs an urban garden called Kebun Kumara, that produce organic vegetables on a piece of non-productive land formerly used to burn trash. Kebun Kumara campaigns on their principles to learn from nature, creatively turning the land green again, all through a modern urban lifestyle. The texts highlight the necessity to change the lifestyle of urbanites to preserve and improve the environment.