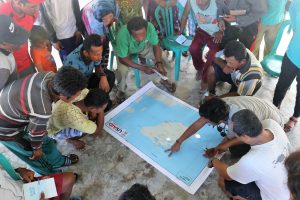 From February 6-10, 2018, CTC in collaboration with the Marine and Fisheries Agency of Maluku Province, conducted a series of socialization and information dissemination to help facilitate the establishment of a marine protected area (MPA) in Buano Island in West Seram, Maluku, as part of the USAID SEA Project.

The activity began with a one-day workshop at district level in Piru, the capital city of West Seram Regency followed by a presentation of the results of biophysic and socio-economic surveys done in 2017 to show the potential of Buano Island as a proposed MPA. 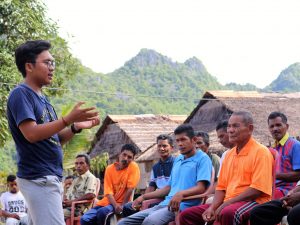 Buano is being proposed as an MPA because of its high coral reef coverage and reef fish diversity. Scientific survey conducted by CTC in 2017 showed that 48.07% of coral reefs at three meter depths are in good condition, while at 10 meter depths healthy coral reef are at 31.63%. This indicates Buano has healthy marine ecosystems and has the potential to recover destroyed areas that were affected by years of destructive fishing practices such as fish bombing. The survey also found high reef fish biodiversity in the island’s surrounding waters with 418 fish species – this is similar to the number of reef fish species found in other well-known areas in Maluku such as the Banda Islands. 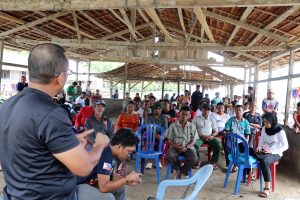 The MPA socialization continued at village level, covering two main villages in Buano, namely the North Buano and South Buano, and six hamlets within the island, namely Naiselan, Anauni, Huhua, Kasuari, Huaroa and Pasir Panjang. During these activities, the team noted the importance of establishing an MPA to help restore fish stocks in Buano island which have been declining for the last few years.

From the interaction with local communities, it was discovered that fish stocks are scarce in the island. Majority of fishermen catch only 10-20 kilograms per sailing whereas they used to get 100 kilos in the past. Most of the fishermen also prefer sell their catch to other areas such as Osi, Piru and Ambon due to high demand and higher price. At local markets, the average price of reef fish is less than IDR 20,000 per kg, while outside the island the price can double. 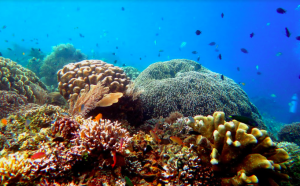 The USAID SEA Project, through CTC, is helping the community in Buano Island establish MPA to restore its marine ecosystems and enable local fish stocks to recover. Through socialization and promoting collaboration with community leaders, non-government organizations, and fishermen’s groups, CTC hopes to usher the revitalization of Buano’s marine and fisheries resources to support the food and livelihood of its inhabitants.

Sorry, the comment form is closed at this time.