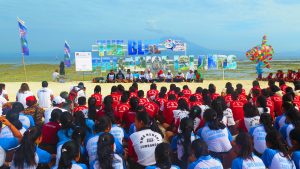 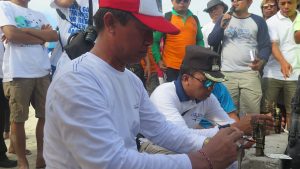 The conservation of Nusa Penida’s marine environment took the spotlight during the event with Klungkung Bupati I Nyoman Suwirta highlighting the importance of conserving Nusa Penida’s coral reefs during his opening speech. A declaration was also signed by various stakeholders to protect and safeguard the coral reefs, an act that solidified relationship and commitment to marine conservation, strongly backed by the local government. 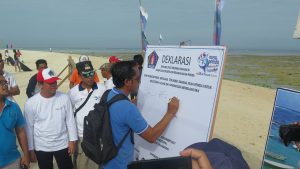 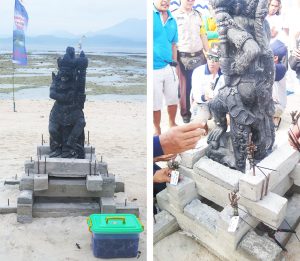 The statue used a puzzle design, which is one of the simplest and safest ways to place heavy objects underwater. Baby corals grown in a nursery were tied to strategic places on the base of the statue with the aim to gain root on the statue and turn it into a beautiful underwater attraction for snorkeling. The baby coral will be monitored once a week for a month and then once a month for 4 months to ensure it is growing well. The corals have been tagged with a date and those that do not survive will be replaced. 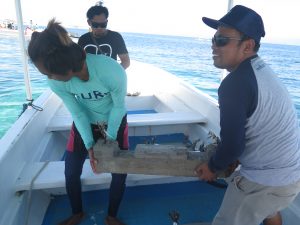 Wira Sanjaya, CTC’s Nusa Penida Project Leader for Marine Conservation noted that a great part about this event was the comradeship between the dive operators, the pontoon owner, conservationists and the district leaders. He hopes that as the corals grow back and with the statue as an attraction, the area once destroyed by the pontoon will become a new destination for snorkeling.

Sorry, the comment form is closed at this time.